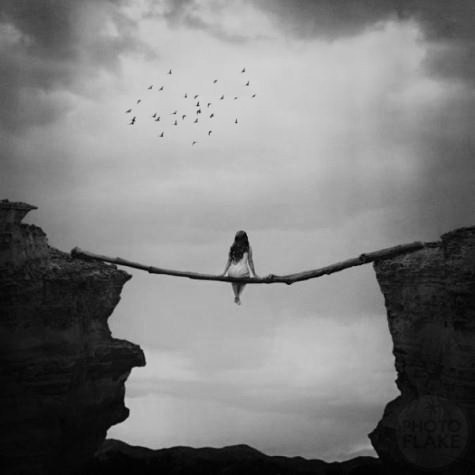 Once on the bridge, she climbed the barriers that society-erected for her own safety. To pitch forward now would mean she be devoured by the shit-brown Thames, yet at this moment she is content to remain chewed, but not digested. She stands upon her own precipice, and observes all that orbits around and within.

SHE had emailed HIM to meet. To ’bite the bullet’, she said. Spontaneity was a precondition as, “nothing she did was ever planned more than minutes in advance”. He fired back a message, traversing that tightrope betwixt appetence and indifference. Then he waited.

The answering email entered his Inbox a week shy of two years later.

He sent his own, prompt counter. He asked, with genuine concern and hoping to not sound creepy, where had she been? Drinking, came the reply. He suggested a Social Media connection to be more efficient, given the “minutes” they would have to arrange something physical. In a surprise move she expedited a phone number where he could make contact in her Shadow World. A request to remain old-skool, and use text messaging. He did so.

He called her phone, but the number she had provided was now disconnected. No matter, for he somehow knew where she was to be discovered. And there he was, also upon the bridge that spanned their Worlds. He edged towards her, and she grinned at him in recognition. He asked, with genuine concern and hoping not to sound besotted, where had she been – drinking? Worse, came the reply. He stepped forward. Panic drenched her as he got too close, so he froze in time.

They drank each other in for two, additional years.

Now he plans to terminate this standoff, but he is confused. He knows not if he holds out his hand to pull her into his Artificial World – or whether he desires help to pull him onto her precipice.

10 thoughts on “Biting the Bullet”