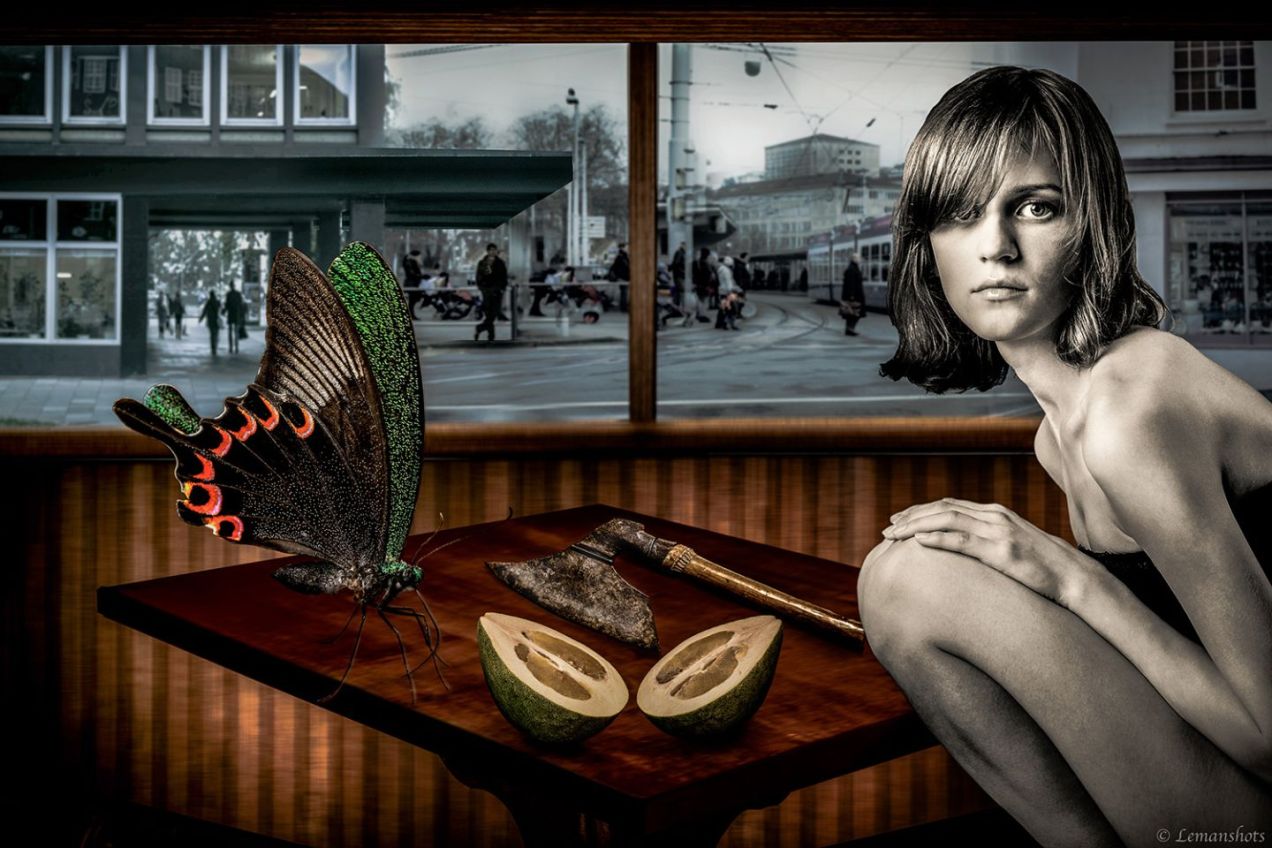 It was a butterfly that drew Aisha’s gaze to the bus stop across the street, where her husband was leaning against a post with his back to her, facing a woman who was standing too close.

Aisha was invisible, on the other side of the road, inside a boutique shop, pondering a scarf.

She first saw the butterfly on a mannequin that wore a flowered dress. Later it was perched on a windowsill, staring outside. Aisha crept towards it, sat on her haunches, and watched its wings quiver in the air-conditioning. Then she found herself looking out the window too.

Aisha forgot all about the butterfly, and as she leaned in closer, her forehead slammed against the glass.

The sales person jerked her head in Aisha’s direction and Aisha waved her hand to say I’m sorry, I’m all right, please don’t fuss. The sales person turned away reluctantly, suspicious now that the woman in the head scarf would cause more trouble. She caught the eye of a fellow worker and shook her head.

Aisha continued staring out the window and watched her husband run a hand through his thick, black hair then lay it on the woman’s shoulder. He pulled her close and Aisha thought she saw him kiss the top of the woman’s bare head. Aisha felt a rage that was terrifying in its volume.

She reached inside her bag for her mobile phone, watched her husband pull his out of his back pocket, glance at the screen to see who was calling, raise a finger to the woman, then turn away to take the call. He was facing Aisha when he placed the mobile against his ear. He said hello, but Aisha could not respond.

He said hello, hello, Aisha, are you there? Then he hung up. She could see he was unnerved because he looked up and down the street and ran his hands through his hair again. Aisha’s own crept up her face and formed a cave over her mouth. ‘What were you thinking, bastard?’ she whispered. She closed her eyes, took a deep breath and let the air out slowly. When she was empty, she straightened her shoulders and walked to the cashier with the scarf in hand. She pulled out a credit card and laid it on the counter in front of the clerk. Aisha turned her head sideways and looked out the window.

The clerk, who had been watching Aisha, scrutinised her face as she rang up her purchase. When she was about to wrap the scarf in paper, Aisha placed a hand on the fabric and said, ‘No, I’ll be wearing this.’ The clerk nodded and handed her the scarf with the credit card and receipt.

Aisha thanked her in a low voice and exited the shop. Outside, Aisha looped the scarf around her neck and thought of nothing.

This story was inspired by Josephine R. Unglaub’s My Butterfly, My Axe.

15 thoughts on “the butterfly collector”