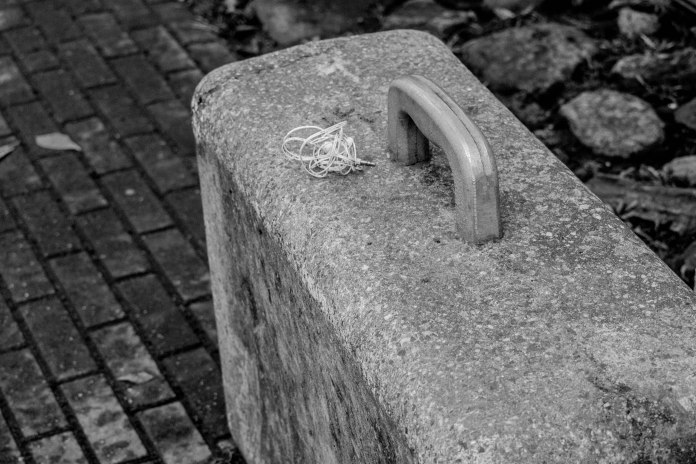 On the day that she left she took only her clothes. She pulled our long unused suitcases from beneath the bed and I was impressed by how swiftly she managed to empty her wardrobe.
As she began to pack I didn’t doubt that everything would fit. She wouldn’t leave anything, only the discarded hangers, which she threw into a corner, a pile that grew ever more twisted and tangled.
I noticed her watching me as I watched her and I stepped back on to the landing and waited for her out there.
She struggled on the stairs with the first case and I follow her with the other. I set it down on the front step and, closing the door, I waited, watching through the frosted glass until she came back for it.

Over the course of the next few months she took back the rest of her belongings, just a few at a time. I have pondered over the years as to why she did this, if it was a misguided attempt to be gentle or out of necessity. Anyhow, she visited the house during the day whilst I was at work.

I imagined her, I still imagine her, deliberating over a particular picture on the wall or an ornament on a shelf. Sorting through the books and records and, although she took her time about it, eventually she had taken everything and I am now left with just the basics.
There are curtains at the windows and carpet on the floor. I have cutlery, crockery, pots and pans but no kettle. I have the cooker, fridge freezer and washing machine. There are sheets and towels in the airing cupboard and I have a bed for sleeping and sofas to sit on. The stereo and the television were hers and these were the last to go.
When she was done she posted the key. For weeks I left in on the mat, moving it around a little each time I collected the mail until, at last, I placed it at the centre of the mantle, above the electric fire and there it remains where the carriage clock used to sit.