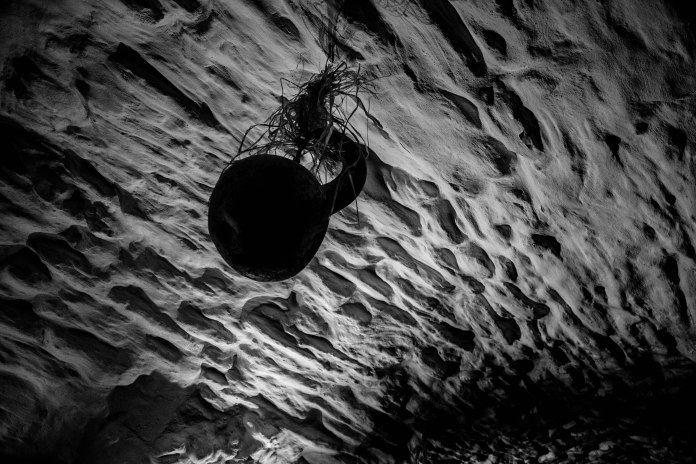 His dad was standing in the middle of their front room holding a coat, a bulky Parka, at arms length by the hood. It looked strange, almost as if someone were already wearing it, but someone without legs or hands.
Joe stepped closer and could clearly see that a flat rectangular weight had been sewn into the lining at the back. Reaching out, he traced its outline along the bottom and up the left hand side and across from shoulder to shoulder and down again.
‘Put it on,’ his dad said.
‘No. Why?’
‘Just do it.’ His dad thrust the coat into his hands.
‘Why?’ Joe repeated.
‘Don’t ask me that,’ his dad replied, ‘don’t ask why, just do it.’

Joe sits on the edge of the sofa and tries to remember not to lean back. Each time he forgets the weight presses into him. He can feel the ridge at its edges, cutting into him. There is something at its centre, a raised logo perhaps, and no matter how he sits, whether it be backwards, forwards or sideways, it finds him, bites into him.
Standing, Joe arches his back and the coat bags out, the weight hanging without touching. It is heavy and he can’t stay like this for long. Anyhow, his dad has told him he must learn to live with it. That he should simply get on and do things as he usually would and it wouldn’t be long before he doesn’t even notice it and he will forget but also that he mustn’t forget and he must never take the coat off, not ever.
Joe wondered how long the coat could contain the weight. Would it be just months or possibly years before it began to rip and fray and was simply a coat again, ragged and worn but comfortable.
Despite what his dad said, Joe knew that as soon as school started again he would be allowed to take it off. He only had to manage until the end of the summer holidays. For three and a half weeks. Twenty five days. It was going to be hard, an ordeal. He had hardly slept last night. Laying on his back was virtually impossible and he could manage on his stomach with the weight pressing down only for so long. Joe had actually drifted off in this position only to wake with a start, gasping and choking for breath. Eventually, after hours of tossing and turning, of wiggling and twisting, he had managed to settle on his side with his arms outstretched and the weight propped against his back. He had been tempted to slip his arms from the sleeves but Joe was all too aware that, at regular intervals, his dad came and stood at the open door and gazed in at him. He started to worry then that, whilst asleep, he would inadvertently set himself free. And in the end it wasn’t that he couldn’t find a way to sleep in the coat but that he was afraid to do so.

Joe had been pacing for hours, back and forth. Standing in front of the open window he gazed out. What he wanted was to go for a walk. Something simple that he hadn’t thought about until then. It was something that adults did, well not his dad, but other adults. Something they said not only to each other, but to themselves. “I need to stretch my legs, go for a stroll, get some air, blow the cobwebs away.”
But Joe didn’t know if he could, if he was allowed and asking his dad would only make him angry again. He was supposed to know the answers and not only the why but also the how?
Now that he was wearing the coat Joe wondered could the weight be seen? Was it still obvious? Out there would others be able to see it? In the bright sunlight he studied his reflection in the glass. But he couldn’t tell, he wasn’t sure.

His dad was sitting in the kitchen, at the table, with his newspaper. Joe moved past him making for the back door. Reaching it he grabbed the handle and pulled it all the way open before turning back.
‘I’m going out,’ he said. ‘Just for a bit, for a walk.’
His dad looked up surprised, startled even.
‘Okay,’ he said.
And shutting the door Joe stepped outside.
‘But don’t go too far,’ his dad called, ‘and don’t be very long.’

4 thoughts on “THE WEIGHT”