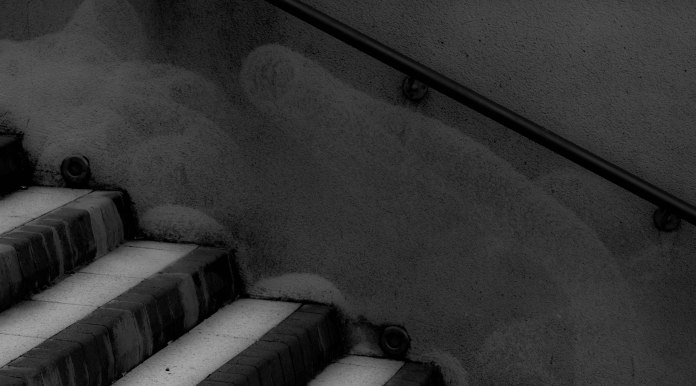 The Station was small and tidy. This is what struck Carter as he stepped onto the platform; how incredibly neat and tidy it was. The Ticket Booth and Waiting Room were painted a muted purple that shone in the sunlight. There were window boxes and the flowers were unseasonably fresh and fragrant. Strangely, there were no signs and Carter had no idea where he was.
He realised that the train he had only just departed was already pulling away and he could so easily have jumped back on board and made his way back but he didn’t.
He moved toward the Ticket Booth and the middle-aged woman behind the glass smiled broadly. But as he drew closer Carter realised that it wasn’t a woman at all but a cardboard cut-out, faded and creased. And the smile he had found so welcoming at a distance was in fact a little grotesque.
Turning from the booth Carter looked around and he could see quite clearly that it was the end of the line. He was unsettled by this but he was unsure exactly why. He also noticed that the section of platform where he stood was separated from the rest of the Station by a chain link fence on his left. Carter walked across and moved close to it. He could see a concrete staircase at the far end that led up to the road above. Carter stepped back and studied the signs attached to the fence, instructing him to ‘KEEP OUT’ and warning him of the ‘DANGER OF DEATH‘. But it didn’t look so very different over there. It was dirtier, yes, grimier and dustier. Most of the floor tiles were cracked and an old rusty ticket machine lay on its back. But it seemed much more familiar over there and Carter realised that it was on the other side of the fence he longed to be.
The fence was split here, there and everywhere. Carter chose a gap close to one of the posts. He pulled and it came away easily. He clambered through and, once clear of the fence, he could hear the traffic from the road above. Carter looked up at the ceiling but it didn’t come down around his ears and although of course no-one was watching he moved stealthily across the station. He was less than halfway up the staircase and he could tell that the entrance had been blocked. He climbed to the top and pushed at the boards but he could see in the gaps around the edge how they had been bolted into the brickwork from outside and there was no way he was going to be able to shift it and break through, at least not without tools. Ideally, a drill and a saw but at the very least a hammer and a sharp chisel but even with tools he would make too much noise and draw attention to himself. No, he couldn’t break his way through.
Turning, Carter heard the train and rushing down he almost slipped more than once on the dusty concrete steps. But he hadn’t even reached the gap in the fence and the train was already pulling away. It couldn’t have stopped for more than a few seconds and Carter had missed it again, his chance to jump on and make his way back.

5 thoughts on “THE LAST STATION”