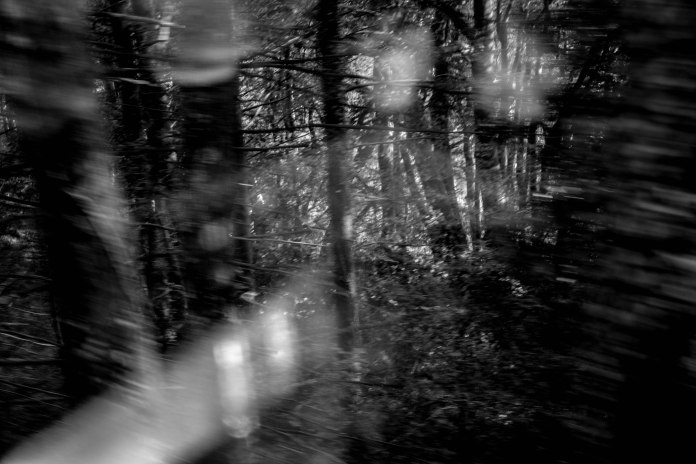 There was a wood directly behind the house and although Joseph had been living on the outskirts for almost a month he still had not ventured into this small but dense thicket. When he needed to make his way down into the village for supplies he would walk around it. There was a beaten track that began just beyond his garden and led straight into the trees but each time Joseph reached the edge and peered in he would find himself stalled and unable to take the next couple of steps. He could see that the path was very narrow and overgrown with bramble and gorse encroaching on either side and it seemed to him that it became even narrower as it disappeared into the darkness.

The others living on the outskirts were making use of the path. Joseph often noticed one of them pushing through the tangled branches and disappearing into them, or someone emerging head down and hunched over, laden with supplies. But once clear they would stretch and yawn, readjusting to the light and reacquainting themselves with the sky.
Just a few days ago one of these men had spotted Joseph watching from the window and, putting down his heavy bags, he had glared back. Looking down Joseph pretended to busy himself at the sink and when he raised his head again, the man was gone.

Following this incident Joseph began to imagine that the others were talking about him, that he was a topic of their discussion. He was sure they were perplexed as to why he continued to walk around, trudging in the wet grass of the meadow, rather than making use of the more direct path leading through the wood. Joseph was convinced they considered him a fool and were laughing at him. He began to keep his distance even more, as far as it was possible. But he continued with his chores, working in the gardens and chopping firewood and hauling supplies from the village. It took him a little longer but Joseph was working hard and doing his share and the others had no reason to complain.

Joseph has hardly slept in days. He creeps from the house and moves stealthily across the garden in the moonlight. Reaching the trees, he stands at the edge of the footpath. The others don’t use it after dark and certainly not at this late hour. Joseph is determined that tonight he will be able to do it, and steeling himself, he takes first one step and then another and suddenly he is walking through the wood. In fact, he is moving quite quickly, almost running and he can’t see but he can feel the brambles and the gorse brushing against his legs and pulling at his coat. And just as suddenly Joseph stumbles and he is down, flat on the ground. There are scratches on his hands and blood on his face and dirt in his mouth. But he isn’t hurt, not really, a little bruised maybe but no more than that and yet he can’t move. Joseph is now frozen to this spot and he wonders how far has he managed to come? Half way perhaps? But he suspects that it is considerably less than that.